Long-Term Unemployment and the Covid Downturn

Even a relatively moderate inflow could still lead to long-term unemployment later if there are subsequently few job opportunities for the unemployed to access. This is because the build-up of long-term unemployment also depends on the ability to escape unemployment quickly. The right panel of Figure 2 shows the percentage of the newly unemployed in each year who find work over the subsequent 12 months.3 The year 2009 stands out as a year in which the chances of escaping unemployment were much lower than in years when the economy was growing nicely, (like 2005 or 2014). The graph for the 2019 unemployed entry cohort is interesting. In the first few months of unemployment in 2019, the chances of finding work were very high compared to other years. This is consistent with the relatively healthy state of the labour market throughout 2019, offering plenty of job opportunities. However the line starts to taper off in months 9 and 12 as the crisis begins and hiring slows down rapidly (see previous post). So if the economy stalls during an unemployed spell, it becomes harder for all the unemployed to find work and long-term unemployment will then build up.
Figure 2. Unemployment Inflows and the Chances of Finding Work The other thing that matters is the composition of the unemployed. We have known for a long time that certain characteristics, like age, gender, skills, region and ethnicity, are associated with a greater or lesser likelihood of both becoming unemployed and staying unemployed. Young people, for example, are more likely to become unemployed but less likely to become long-term unemployed. But, as Figure 3 shows, it was ever thus. So the composition of the unemployed inflow this time round doesn't look very different.4 Which means the likely long term unemployment trend this year depends more on the future level of demand.
Figure 3. Who Becomes Unemployed? 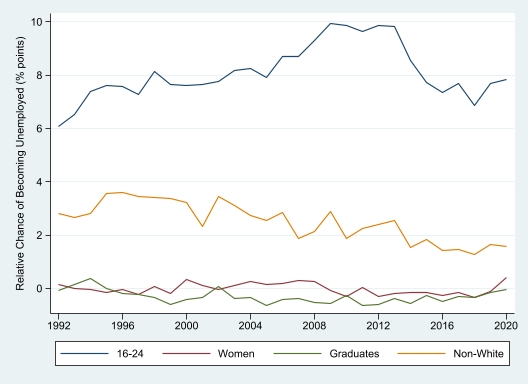 So three things will determine whether long-term unemployment becomes a problem next year. The number of people laid off, the composition of the newly unemployed and the number of job opportunities that arise over the year. At the moment, the latter looks likely to matter more. Which means trying to keep demand bouyant and helping ensure there are enough job opportunities in the subsequent months. It is a lot easier to find work if demand in the wider economy holds up.
1 ↩ Using the official ILO/OECD classification. There is however no official definition of long-term unemployment. The Figures are all compiled using the grossing weights supplied by the Labour Force Survey (LFS).
2 ↩ They are measured as a percentage of the labour force rather than as a headcount to net out population growth over time.
3 ↩ The data are derived from the LFS longitudinal panel.
4 ↩ The numbers are based on a regression of the chances of becoming unemployed. The coefficients are percentage point differences relative to the missing group (eg 25-64 year olds) net of the other characteristics. Figure 3 suggests the newly unemployed are a bit less non-white, a bit more female and graduate perhaps than in the past, but not much.

Posted by jonathan wadsworth at Monday, November 30, 2020
Email ThisBlogThis!Share to TwitterShare to FacebookShare to Pinterest