SWOB 9. Is it Worth It? Are there too many graduates in the UK?

Welcome back. The Bank of England has a regular labour market commentary in its quarterly bulletin in which it looks at issues that may influence productivity, wage pressure and hence inflation (if wage pressures are passed on to consumers in the form of  higher prices). In their latest post there is a chart which suggests that the wage benefits of being a graduate have receded over the past 20 years, which they suggest may be because the supply of graduates has risen faster than demand or that the "signalling" value of a degree is more muddied now because so many people have one.  Yet the IFS published a study this week saying there were large benefits to being a graduate - though some graduates are more equal than others.  So what's going on?
Well partly the studies use different data and so focus on different aspects of graduate employment. As such it may be worth looking at some basic facts about education, work and pay. The graph below shows that the share of graduates in the population is indeed rising quickly. Nearly one quarter of the UK working age population now has a degree, up from one in fourteen in the mid-1990s. The shares of those with A level (or equivalent) and GCSE qualifications are broadly stable, while that of those with no qualifications is falling rapidly. (This doesn't mean that all school leavers are now becoming graduates, rather that shifts in educational attainment  manifest themselves this way). There are now more than 3 times as many graduates in the working age population (11.5 million) than those with no qualifications 3.3 million). This means that the average graduate is not the same as the average graduate 20 years ago. Neither is the average person with no qualifications. For example, the typical no qualifications is 2 years older with more work experience on average now compared to 1995. The typical graduate is 2 years younger now with less work experience - but the variation in experience for graduates is also now so much bigger than in the past - largely because there are so many more of them. So it is becoming harder to summarise the experience of gradates by the average.  An issue we will return to in a future blog. 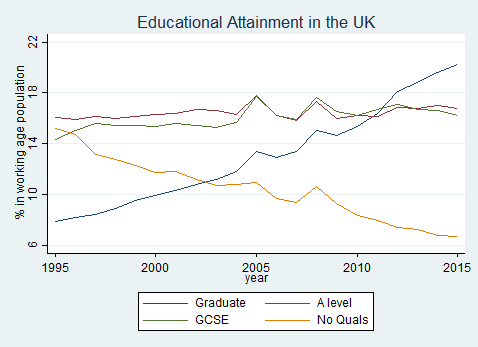 With that caveat in mind here is a graph of pay differences by education over time.  Measuring pay differences is a little tricky since a simple comparison of wages across groups at any point in time, takes no account of differences in pay that might be caused by other things (like experience). So each line below plots the average  approximate % average difference in pay of groups with differing levels of educational attainment after netting out the influence of age, gender and region of residence on pay. (future blogs will look at how sensitive these gaps are to netting out different effects). While falling by around 10% over 20 years, the graduate premium is still around 100% higher relative to no qualifications and 50% higher than the average A-level or equivalent worker (the graph is in logs so these are only approximately % differences, 70 log points is around 105%).   On a full-time salary, that's an average yearly pay difference of around £20,000 and £10,000 respectively in favour of graduates. And while that is an average across all ages, those pay differentials are more or less sealed after the age of 30 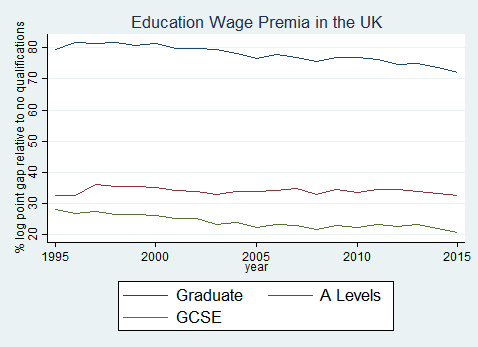 
The other issue with regard to education is that cushioning impact it has on job prospects. If graduates were not in demand we might also expect to see their relative unemployment rates falling over time. The last graph tracks the chances of being unemployed for each qualification group relative to those with no qualifications (net of other influences on unemployment like age gender and region). It can be seen that a graduate education was the best means, on average, of securing employment over the downturn and in a recovery. 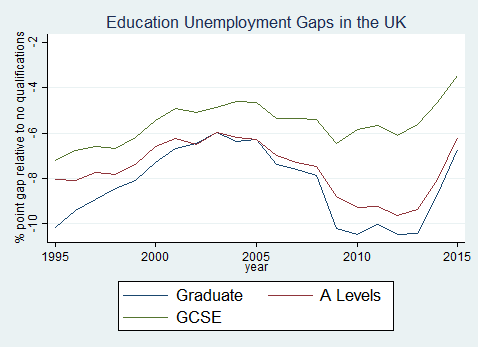 So what are we to conclude? Is there an over-supply of graduates?  Is it still worth going to university? If measured by the extent that being a graduate - despite there now being so many more of them - still generates an average pay premium and employment protection way in advance of other educational types then the answer is almost certainly still yes, even net of the now considerable cost of financing a graduate education. It's just a shame about all those fridge sharing issues that will ensue.

Posted by jonathan wadsworth at Monday, April 18, 2016
Email ThisBlogThis!Share to TwitterShare to FacebookShare to Pinterest