Immigration has for some years been the uppermost worry among the issues thought to be facing Britain in many opinion polls so it - or rather people's perceptions of its extent and its effects - is almost certainly one of the key issues that will influence the upcoming vote on whether to stay or remain in the EU.  A new report from the CEP  looks into this. Workers have had a rough ride in recent times. Real (inflation adjusted) wages fell by around 10% in the years after the global financial crisis of 2008 and the ensuing austerity. Such a sustained fall in pay is unprecedented in British post-war history.

Alongside falling wages, immigration from the EU has gone up a lot. Between 1995 and 2015, the share of EU nationals as proportion of working age adults more than tripled from 1.8% to 6.3%, and most of this happened after 2004 when the eight East European countries – the A8 – joined the EU.

So it is understandable that many people believe this migratory wave hurt UK-born workers and hence leaving the EU would make things better.

At face value this might seem plausible. Since immigration increases the total number of people in work or looking for employment, doesn't that mean that UK workers unemployment must have been harmed by this increased competition for jobs?

The short answer is no. There would be harm only if the total number of jobs was fixed. But since immigrants also consume local services and goods, this increases demand and so raises job prospects for all.

But even if there is no reason to think that immigration should increase unemployment, is it not obvious that an increase in the supply of workers must drive wages down? No. Alongside the increased demand that a rising population brings, greater movement of labour allows countries to specialise in what they are best at, just like increased trade. Firms will change the mix of their products to account for the new skills available to them. Immigrants, especially if they are more skilled, can boost productivity. All these effects will tend to increase wages.

Consequently, the impact of immigration on UK-born workers is an empirical question and not a foregone conclusion. We need to look for evidence. 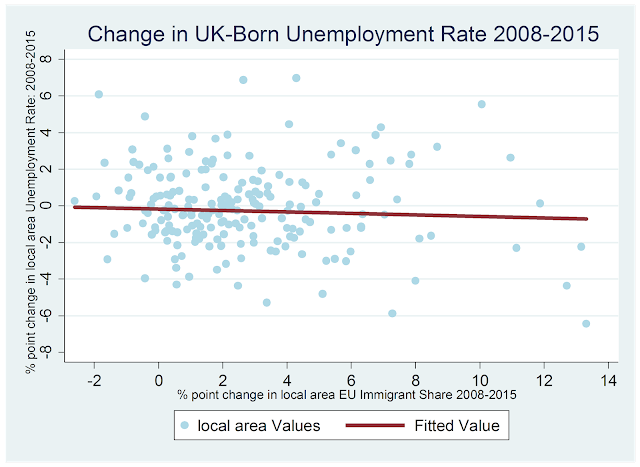 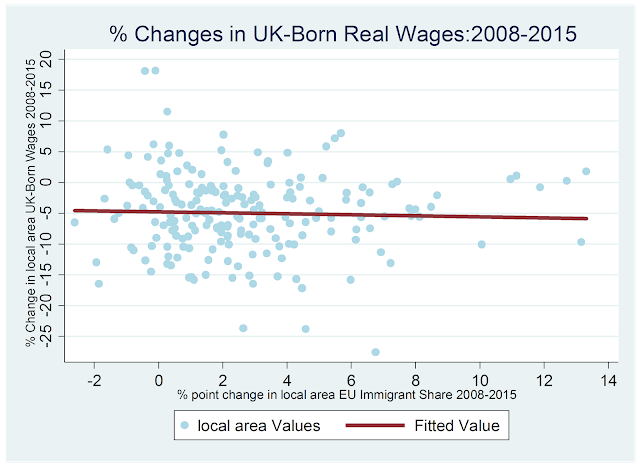 The upshot? It is hard to put the blame the EU immigration for any adverse experiences of UK-born workers with regards to difficulties over jobs and falling real wages. Rather the finger should point to the largest economic crash for more than 80 years and ensuing austerity


More details on this can be found in a new report from the CEP . We will return to this in a future
blog

Posted by jonathan wadsworth at Wednesday, May 11, 2016
Email ThisBlogThis!Share to TwitterShare to FacebookShare to Pinterest